One of my favorite things to do in the classroom is to make movies. It’s an amazing tool to teach a subject or to check for understanding. It engages and enchants students. When they see what they’ve created, their faces light up. And really, isn’t that what we strive for, to find innovative ways to capture the attention and imagination of the students while being able to check for their knowledge of the content.

For those of you who follow my class blog, you know that we make a variety of movies. The majority of our movies are shot using a green screen. Last year we used our green screen to create endangered animal news reports, a movie trailer for the book The BFG by Roald Dahl, interviews with famous people for our biography reports, our own version of The Brady Bunch called The Avery Bunch to learn about fractions, as well as numerous other math videos. This year, we’ve created the Math Movie Network. We’ll be using the green screen for numerous math videos throughout the year. 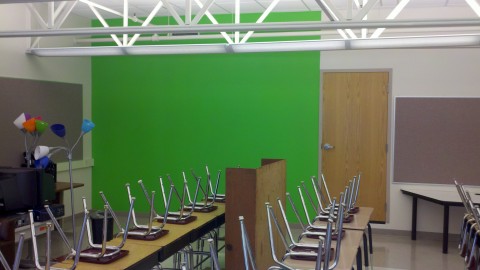 Now, before we get to the tutorials, let’s talk about something equally as important, cost. As I mention in one of the videos, the majority of us are definitely working on a budget. A professional green screen setup with proper lighting and appropriate recording equipment will easily run you over $1,000 USD. The total cost for everything I use came to about $300 USD. That includes a Flip video camera, Pinnacle Studio 14 (the video editing software we use), a green screen, and two lights. If you already have a video camera of some sort, you can cut that cost right out! Of course, there are also other options for the software that you can use chroma keying (a green screen) with as well. If you have a Mac, you can use iMovie. If you have a PC, you can consider more advanced editing tools like Adobe After Effects and Sony Vegas. You can even use some older versions of Windows Movie Maker as well.

When using a green screen, there are a few main things you need to keep in mind. First, you need an even color. That means if you are using cloth, it can’t be wrinkled, as this creates different shades of green. This also means that you need to use lighting from both sides to make sure there are no shadows behind the student or image in the video shoot. Second, on the day of video production, students can’t wear green or even a similar color such as yellow. The reason for this is that your basic video editing software uses something called chroma keying. This is where the software will extract the color green from your video. If you use a blue screen, it would extract the color blue. If a student wore a green shirt, when the software extracts the color green, it would, in essence, take away the students shirt so they would just become a floating head. Of course, that could make an interesting video on its own if you were interested!

In the first two video tutorials below, you’ll see how to use the chroma keying option in Pinnacle Studios. You’ll be able to see how to extract the green screen from the video and then add in either a background image or video. In the last video, you’ll be able to find a tutorial on using the green screen in iMovie created by Jonah Salsich, an amazing third grade teacher who I’m so glad to have as a part of my PLN.

Below, you’ll find a few examples of the green screen in use as well as the finished product after. The first video shows a student filming in front of the green screen. The second shows a movie trailer we created for the story The BFG. After that we have the third video which was filmed as an introduction to this year’s Math Movie Network. The final video was created by Linda Yollis and Jonah Salsich as part of their Reading Round-Up Blog.

There are so many amazing uses for a green screen in the classroom. It allows you to transport the students anywhere in the world as part of a video. I’ve enjoyed using it to create year long newscasts where students complete various reports “from the field” as part of a project. This year we’re using it to create a studio effect for part of our Math Movie Network. You could have students star in plays right in the classroom and then have parents come in to watch with the students. Students could also recreate scenes from history and you can import photos to match the era behind them. Once finished, you can upload it to a site like Vimeo, YouTube, or SchoolTube. You can then embed it on any of your sites! With all of this, there are limitless possibilities for student projects with a green screen.

The green screen doesn’t have to just be for student projects though. As you saw in the fourth example video, Linda Yollis and Jonah Salsich do an amazing job of using it to share important material with students. It’s amazing through the use of a green screen and camcorder footage, they were able to put together this video even though they live thousands of miles apart. You could use it to create a video to share content or introduce a new unit. No matter how it’s used, a green screen engages and captivates an audience. There is no doubt that you will have their attention.

*Have you ever tried using a green screen before?*

*What are some pros and cons to using a green screen?*

Welcome to your brand new blog!

This is a sidebar and can be changed in Widgets in your dashboard.

You can also modify number of sidebars in theme options!